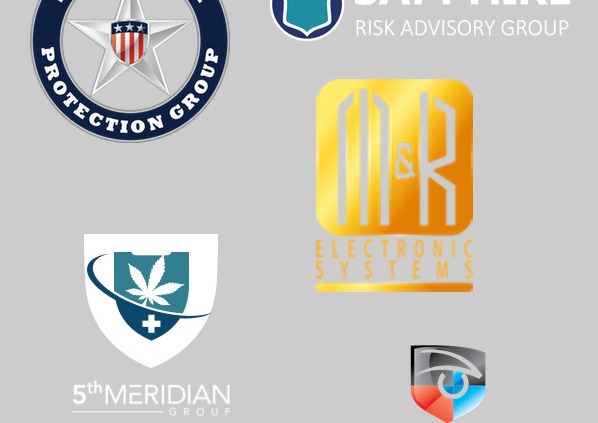 As a business with highly transportable valuables, weed and cash, cannabis companies have to keep security top of mind long after they fill out their license applications. Recently, Grown In asked readers who they turn to for security consulting. Here are five firms our readers are talking about.

“People will decide to not use armed security or security officers thinking, ‘An armed robbery in this area is probably not going to occur.’ However they fail to realize the impact of that one robbery,” cautions Allen. “When it does happen to a cannabis facility, the damage it does, if someone is injured or killed, they fail to realize the damage it does to the facility, to the brand name, to the employees.”

“It’s one of those rare, once in a career opportunities when something falls into your lap,” said Scott Superfine, the third generation owner of security firm, M&R Electronics. Mitch Kahn, the president of Grassroots was referred to him by a security system manufacturer to fix the installation of a system Grassroots had purchased for a dispensary. Superfine’s company, “clear[ed] up the mess. They asked us to do their next dispensary, and their first cultivation site, and now we’ve done work for them in 15 states, 30 to 40 dispensaries, and off to the races we went.”

“It was one of those things, where both sides realize they have an investment in each other. We looked at it as being a fiduciary of their money,” said Superfine.

M&R focuses on the design and installation of security systems. While most of their business is primarily in Illinois, M&R has become a national company for the cannabis business.

“We’ve done just about every kind of building for clients in the last five years. And they’re all different because there’s no synergy on a state by state basis. They all have different requirements,” said Superfine. “In Pennsylvania you have to have two years of video storage. In Michigan you have less than three weeks. Every state and opportunity is a new challenge.”

With seven years of cannabis security consulting experience in thirty states, Sapphire Risk’s Managing Partner Tony Gallo says, “One of the biggest mistakes I see from people applying, they are not willing to make the commitment to win the license. They are willing to spend $100,000, but not $120,000. If you are going to apply, you need to understand what it’s going to cost to get that license. I’m going to commit and get the license.”

Based in Dallas, Gallo called Grown In from Tacoma, Washington, where he was conducting a security review for a client dispensary who experienced a break in last week. Besides security reviews, Sapphire Risk assists with application writing and designing day-to-day procedures, like cash management, to building out onsite security systems and training.

“It’s a big miss in this industry: A lot of times people feel, ‘Oh they’re not going to steal from me.’ [Cannabis] is not a unique industry. People in retail steal. That’s just how it happens,” said Gallo.

Owned by Daniel Farrell and his twin brother Ed, Daniel was a hedge fund manager and Ed was a retired U.S. Marshall when Daniel was helping Revolution Global in Chicago with their Series A round capital raise. Ed became Revolution’s security consultant for their dispensary and cultivation sites in 2015, and based on that work, the Farrells then assisted Union Group with security plans for their dispensaries in Illinois in 2016. Their business has only grown since then.

“One of our core competencies is writing the applications. We’ve been first or second for most applications. We want to help layout your store. We’ve been doing dispensaries for five years. We understand how the flow of traffic works. If you win a license, we want to make sure you build it out the right way. We’ll sit down with the chief of police, go to the zoning meetings, and testify to the city council.”

Once a cannabis facility is operating, Silver Star will provide on-site security, annual security training for staff, post orders for security officers, and with transporting cash.

“We work with people that got into it for the right reasons,” said Farrell. “Being in a dispensary day in, day out, we see it. Hearing people’s personal stories. It’s rewarding. People don’t understand that aspect of the business.”

A retired Secret Service agent, Bill Cousins ended his 31-year law enforcement career as agent-in-charge for Detroit in 2014. Then during his second career, while running global security for some Michigan manufacturing companies, Cousins advised Michigan cannabis regulators on security standards for licensing.

“My philosophy is to be preventative ahead of time. Don’t be reactive. Know this type of incident may occur and have plans to mitigate the incident and help secure the enterprise,” said Cousins. “It could be anything from a tornado to a fire, or armed robbery, or more violent, an active shooter. Be prepared for it, the leadership can’t sit there and say, ‘Now what do we do?’ They have to have hardcore plans, documented, written.”

“In our litigious society, we all know somebody is going to be sued for something. If you’re not ready for that lawsuit, it could cost you your business,” said Cousins, who also acts as an expert witness for clients. “If you don’t have a person with the horsepower to defend it, you’re just going to add more zeros to the check you’re going to write them. That’s my concern about the industry, there’s too many charlatans.”

This site uses cookies. By continuing to browse the site, you are agreeing to our use of cookies.

We may request cookies to be set on your device. We use cookies to let us know when you visit our websites, how you interact with us, to enrich your user experience, and to customize your relationship with our website.

Click on the different category headings to find out more. You can also change some of your preferences. Note that blocking some types of cookies may impact your experience on our websites and the services we are able to offer.

These cookies are strictly necessary to provide you with services available through our website and to use some of its features.

Because these cookies are strictly necessary to deliver the website, refuseing them will have impact how our site functions. You always can block or delete cookies by changing your browser settings and force blocking all cookies on this website. But this will always prompt you to accept/refuse cookies when revisiting our site.

We fully respect if you want to refuse cookies but to avoid asking you again and again kindly allow us to store a cookie for that. You are free to opt out any time or opt in for other cookies to get a better experience. If you refuse cookies we will remove all set cookies in our domain.

We provide you with a list of stored cookies on your computer in our domain so you can check what we stored. Due to security reasons we are not able to show or modify cookies from other domains. You can check these in your browser security settings.

These cookies collect information that is used either in aggregate form to help us understand how our website is being used or how effective our marketing campaigns are, or to help us customize our website and application for you in order to enhance your experience.

If you do not want that we track your visit to our site you can disable tracking in your browser here:

We also use different external services like Google Webfonts, Google Maps, and external Video providers. Since these providers may collect personal data like your IP address we allow you to block them here. Please be aware that this might heavily reduce the functionality and appearance of our site. Changes will take effect once you reload the page.

The following cookies are also needed - You can choose if you want to allow them: